While out junkin' this week, I was listening to the radio and Big D and Bubba ask the question - what is your favorite song that you never get tired of hearing? It got me thinking about a few of my favorite songs.

The first few that came to my mind included
A few songs that callers mentioned on the radio (that I remember, since I was driving) were
As they said on the radio - the old songs are the good ones. 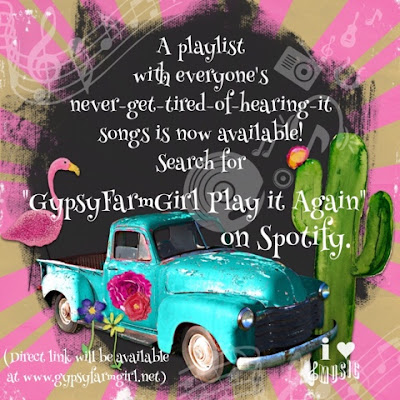 Friday, I was wanting to music to flow through me, wanted to listen to something new / different, while I worked and got to wondering what everyone else's favorite, play it again and again songs were, so I ask on Facebook and Instagram and got some great songs! Some I knew, some I hadn't heard before, some I had heard, but didn't know who sang them. Just like the callers on the radio, it was mostly older songs, but these came from a wider genre - old country, new country, classic rock, gospel, etc. From Dolly and Kenny to Fleetwood Mac, The Rolling Stones, Lynyrd Skynyrd with two songs, Brothers Osborne, and George Strait, to Johnny Nash, Shania Twain, Casting Crowns and Matthew West, there is a wide variety of music here! Fishin' in the Dark  and Stayin' Alive each got two mentions on Instagram and a couple of Miranda Lambert  and Pistol Annie songs were included. A little Chris Stapleton and Eric Church, Aretha Franklin, Vern Gosden, Ray Price, Hank Williams, and Drake White. It's a fun, eclectic playlist and I've enjoyed putting this together and discovering new and old music!

Check out all of the songs that have been listed by friends, if you're on Spotify! I don't listen to Spotify often, but it has been a great way to discover different songs and create a playlist. Feel free to follow the playlist called "GypsyFarmGirl Play it Again," with all of  your favorites!

Have a favorite, play it again, never-get-tired-of-hearing-it song, that isn't listed? Let me know and I can keep adding to the playlist!
Posted by GypsyFarmGirl at 1:52 PM