Through a series of events over the last few weeks, I became the owner of my Grandmother's sewing machine! Meme has Alzheimer's and lives in the nursing home, but my uncle still lives in her house. He was wanting to get rid of the sewing machine at the same time I was looking for a machine! Win-win for both of us! 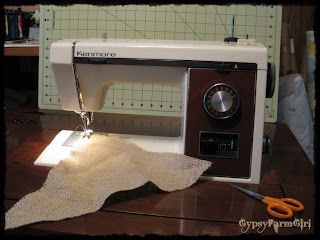 Over the phone he told me it was a Singer, but when I went to pick it up Thursday I discovered it was a Kenmore. It was newer than I expected, but that's ok because I was wanted a machine that was capable of doing different stitches. It came with a nice cabinet and a stool as well.
﻿ ﻿ I've done a little research and found diagrams of how to thread the machine and was able to contact Kenmore and they told me the machine was manufactured in 1987. Kenmore promised to respond to any email inquiries within 24 hours and I will say they followed through with their promise, responding in less than 16 hours! I have found a few instruction manuals online, but haven't clicked the buy option yet.

Today we plugged her in and give her a test run. We discovered a washer needs replacing and can't wind a bobbin until we get the new part, but I had a bobbin already wound from my other Grandmother's machine. My sweet husband, who can fix anything, was right there helping me adjust and check it out. We tinkered a few minutes and oiled a few places and by golly, SHE SEWS! I bent and broke a few needles in the process of getting everything lined out, but fortunatly, Singer needles worked in a Kenmore machine and I was able to keep playing!

I am Sew excited to now have both of my grandmother's sewing machines! I never really remember Meme sewing like I do my Grandmama, but I know Meme was an excellent seamtress. I do know that she worked at a sewing factory when she moved to East Texas. I know that the machine hasn't been used in at least 15 to 20 years because of Meme's health issues and the machine appears to have been used very little. 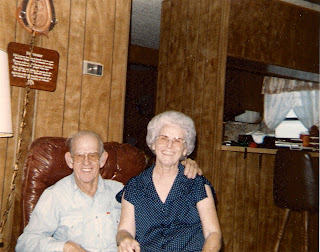 This is a picture of Meme and Granddad sometime in the mid to late 80's. Granddad has been gone over 20 years and Meme's mind has been gone a long time. Alhzeimer's disease is such a sad thing. I went to see Meme last night and told her I got her machine and couldn't wait to try it out. I have no idea if she could understand me or not. Now I'm brainstorming on what I can make Meme with her machine....
Posted by GypsyFarmGirl at 4:51 PM

Email ThisBlogThis!Share to TwitterShare to FacebookShare to Pinterest
Labels: sewing