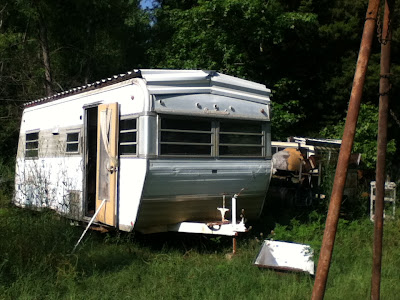 I have been wanting a vintage style camper for what seems like forever. I keep searching craigslist, eBay, and everywhere I drive in hopes of finding one for sale... Cheap of course and reasonably close. (All the ones on eBay seem to be way up north.)

If you follow on pinterest, you can tell that one night this week I pinned a lot of vintage campers and that's what I really want mine to look like. I have visions of how I will decorate it very shabby chic style and even bought bedding at a garage sale a few weeks ago that would be beautiful in it.

So after browsing and pinning away Monday night, I had this dream that I found the perfect camper for sale, in my budget. I had a choice of two different ones, owned by the same person. One was gray and north of Dallas with the second one being south of Dallas with a shabby chic white interior. I chose the white one.

I usually only have nightmares, but I shared this sweet dream with my husband Tuesday morning. I said it was either my lucky day or I stayed up way too late pinning!

So Tuesday afternoon I talked to him while I was at work... He had been working on a truck and a hoe (get your mind outta the gutter... It was a Backhoe!) with a neighbor who has a fabulous collection of junk. He mentioned I was looking for a camper and Mr. D said I could have one of his! He has a couple old campers amongst all his stuff.

This picture is how I found the camper this morning. It's a mess and will need a total over haul, not just decorating. There were two campers, owned by same person, except they were east of Dallas, one mile north of my house. Now I have to decide if I really want to undertake this big of a project or keep looking for another camper in better shape.

Oh and this one has white interior! Someone sheet rocked the inside at some point and added the crazy roof. Other than that, it's a mess and will need lots of sweat equity. But then I think about what the Junk Gypsies did with a gutted camper, and I think I might just be able to do this.

Decisions, decisions...
Posted by GypsyFarmGirl at 10:46 AM